It’s Friday, and that means RE:INVENTION’s Leadership team is discussing another hot topic in our weekly blog feature, 5×5. New to our blog? Every Friday our team reviews and debates a controversial news article or research report.

UP THIS WEEK: A look into Amazon’s Drone Delivery

Last Sunday on 60 Minutes, Amazon declared that it will offer 30-minute or less air drone delivery for packages under 5 pounds by 2019. There are a variety of opinions on this announcement, from those believing that Amazon has reinvented shopping by bringing together the best aspects of both online and in-store experiences, to those that believe that drone delivery is infeasible and simply a PR stunt.

When is signaling your intent strategic?

You use defensive driving strategies to signal your intent when you are out on the open road. Signaling can also be useful in business to create strategic advantage.  In fact, nearly every aspect of marketing signals value to potential customers: SEO, social media, your website, blogging, press releases, analyst presentations, investor calls, annual reports, news articles, even discussions with employees and customers.

Any company can release preemptive announcements to ruffle a competitor’s feathers and upset industry balance. In the case of Amazon, their recent drone delivery announcement was less of a signaling event than it was a deflection. A PR stunt designed to drive attention away from lackluster earnings performance and recent negative PR about working conditions in company warehouses.

And it worked. The social media world exploded after the sensationalistic headlines.

Is Amazon innovative? Absolutely. Amazon offers an extremely diverse product line and they already make it super easy to get their products to your front door. The company has appeared in the top five on Fast Company’s Most Innovative Companies list year after year. They continue to play the long game.

Is drone delivery innovation possible in the near future? Not yet — but that really doesn’t matter. While cynics, optimists and realists alike debate the feasibility of drone deliveries, the regulatory challenges, and implications for privacy and liability, Amazon has successfully captured “share of mind” just in time for holiday sales. In his response to this week’s 5×5, RE:INVENTION market analyst John Clark shares a nifty chart revealing the impact the drone announcement had on Amazon’s site traffic and sales. Worth a look.

For the record, drones terrify me. If you were my Facebook friend, you could explore my Photo Album featuring drones caught on camera across San Diego. What scares me more? I once dated the “actor” who plays the customer in the Amazon Prime Air video.

For a great weekend read on the power of preemptive announcements, check out “Big Fishes Make the Best Sushi,” by Pasi Pietikainen.

I think the Amazon Drone Delivery announcement was more about reinforcing innovation as part of Amazon’s brand and a marketing ploy rather than a serious investment.  Drone delivery certainly has potential to achieve same day delivery at low cost. Ironically Amazon’s attempt at innovating logistics itself is fraught with logistical hurdles not to mention regulatory hurdles.  If government was not in the way, I’m sure Amazon could launch an effective service tomorrow.  However, regulatory and liability roadblocks are aplenty in the way of making drone package delivery to your doorstep a reality.

Nevertheless, I do think it is possible to achieve partial success in this area.  Drones could become a very effective way to move packages between distribution points.  Drones could move packages point-to-point between regional and local distribution centers.  This could be an effective way to achieve same day delivery within a manageable airspace.   Amazon could partner with existing delivery services such as UPS and FedEx to achieve this reality.

Amazon’s announcement’s primary purpose was to reinforce in everyone’s mind that Amazon is continuously investing in innovative ways to meet customer demand at low cost.  As a marketing ploy, it could potentially influence more loyalty amongst customers given everything else being equal.  A customer could be influenced to buy from Amazon simply because they know that some of that money is going to be re-invested into improving customer service rather than shareholder pockets.

But I do think their investment does have serious undertones.  As long as they continue to stretch their imaginations and push existing boundaries and regulations, they may emerge successful at some point.  Regulations are natural innovation killers.  It’s nice to see companies with deep pockets challenge the status quo to continue to push innovation in an effort to remain competitive and retain customer loyalty.

You fake it until you make it. Amazon has a reputation for pushing boundaries, and making it. This is what they are aiming for with this announcement. A call to action, if you will, to potential partners who would want to make this happen with them. It might also have been to put themselves in the conversation at the start of the Holiday Season.

Whether it was a PR move or not, doesn’t matter. When you are company who always pushes it, and makes it, you are in the unique position to do preemptive announcements.

Signaling intent can be a very strategic move when it is done properly. If an innovation isn’t yet developed, the company releasing its information to the public must know either that competitors will be unable to mimic it or that they will inevitably copy it. If other companies are conducting similar research, it may be more strategic to release that you are the first company to have developed that idea.

UPS and other companies have been doing research similar to Amazon’s on drone delivery, but Amazon’s decision to release this information five years ahead of when the drones will be in use gives the company the public image that it was the first to develop it.

Amazon’s Jeff Bezos undoubtedly made his decision to release the drone delivery news in a strategic, timely manner. Announcing the company’s research and development in a 60 Minutes feature on the Sunday preceding Cyber Monday was an effective way to generate hype around the company and therefore more online traffic to the Amazon website. And it worked. Take a look at the following graph, which outlines the number of unique IP addresses that visited the sites on Black Friday and Cyber Monday: 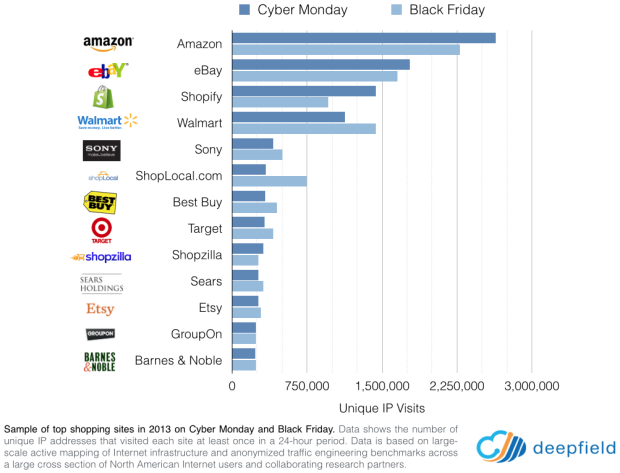 Though Amazon is at the top of this chart every year, the amount of unique IP visits on Cyber Monday is significantly higher than the other companies listed.

This is not an allegation that Amazon is completely faking it, as I fully believe that they are working towards releasing drone delivery technology. Amazon is widely recognized for being a very innovative company. However, I do think that it will take longer than five years for the drones to be fully developed and approved by the FAA. The concept of same-day drone delivery, especially if it can be done within 30 of ordering, will reinvent shopping, bridging the gap between e-commerce and instant gratification and allowing for the best of both online and in-store shopping. For now, as the reference article from Forbes puts it, figuring out how to accurately forecast delivery locations and quantities is a more pressing issue for delivery logistics.

Sorry. I’m simply too busy to blog right now. I’m trying to coordinate a drone delivery of Omaha Steaks as part of Amazon’s test market strategy. Let’s catch up later, after I’ve had my tasty snack.

We can only speculate Amazon’s intentions from releasing news on its air drone delivery services. Whether they strategically made this announcement to cover up negative PR, to drive shoppers to their website on Cyber Monday, or simply because they wanted to inform the public of their innovative company culture, the bottom line is that the announcement has generated a lot of excitement and anticipation for a revolutionary online shopping experience.

No Comments to “Amazon’s Drone Delivery and Signaling Intent”