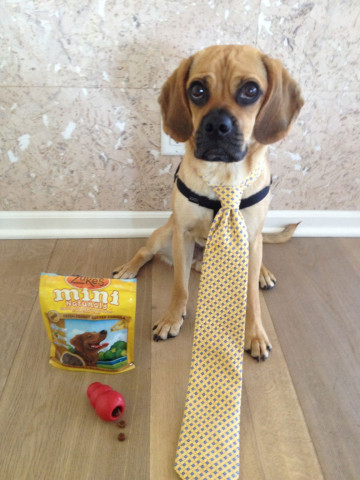 Some people may think my role on RE:INVENTION’s leadership team is merely a glamour or figurehead position. Not so! Like my human counterparts on our market intelligence and innovation consulting team, I like to stay informed about new ideas and smart companies that share the same dedication for value creation as RE:INVENTION. When I notice something remarkable, I drop what I’m doing — or chewing — and write a blog so everyone can share in my tail-wagging excitement.

Every day I surf the web and fetch information that can be inspirational or educational for my colleagues and our clients. I’m pretty tech savvy for a pooch, even though it can be tricky to tap an iPad with a paw.

Last month, Ryan Caldbeck of CircleUp.com solicited nominations on Twitter for the 25 most innovative consumer and retail companies to be profiled on Forbes.com. A panel of experts reviewed the nominations to help determine the final list, which has now been published. No, I was not on that panel, but I LOVED the list especially the inclusion of two pet-related companies: Zuke’s and Kong.

OK. So in the spirit of full-disclosure, I ate the list after I printed it out. Hot dog diggity it tasted good, although not as good as Zuke’s mini peanut butter treats.

ZUKE’S makes all-natural treats for dogs and cats to promote an active lifestyle for four-legged creatures like me and our owners, plus help maintain the health of the planet on which we all live. The genesis of the idea came when the company’s founder noticed his dog was becoming exhausted during a hike, so he gave him a piece of his all-natural energy bar for humans and he perked right up!

KONG manufactures pet toys inspired by a rubber suspension part from a Volkswagen bus the company’s founder was working on. Much to his surprise and delight, he discovered that his police dog preferred to play with the car part over other toys on the market (and things like shoes and purses, which take it from me, is quite an accomplishment).

The common thread between the two companies (other than the inherent awesomeness of their products, in my humble opinion) is how they both turned an accidental discovery into a highly marketable and successful product line. Zuke’s is well-positioned in the $2 billion U.S. pet supplement industry, and Kong offers 360 products sold in 66 countries worldwide.

If there’s a takeaway for the entrepreneurs out there, it’s that they should think of an opportunity like us dogs think of a Frisbee: don’t just let it sail over your head, grab it and run with it. Zuke’s and Kong clearly have this attitude and then some.

The prevailing question of the #CircleUp25 was: Who is doing something amazing in the consumer space right now? All of the companies that made the list fit that bill — including Chicago’s Abe’s Market and San Diego’s Suja Juice — but Zuke’s and Kong are the real standouts for me. I’ll gladly accept any free samples they’d like to send my way. RE:INVENTION’s Managing Partner has tightened the leash on my using the company credit card for purchases. Especially after I subscribed to DogTV in the office without written approval. See, I told you I was tech savvy.