RE:INVENTION’s Innovation Expert Series features interviews with key executives at small to midsize companies that are notably disrupting, transforming, and innovating within their respective industries or markets.

In this week’s Innovation Expert Series interview, we’re getting up close and personal with Wienke Giezeman, the passionately disruptive co-founder of The Things Network.

The Things Network, an Amsterdam-based startup on a mission to build a global community-led Internet of Things (IoT) data network, could create abundant data connectivity and turn “smart cities” from an idealistic dream into a reality. The ambitious startup successfully crowdsourced a city-wide Internet of Things data network in Amsterdam earlier this summer. Now they are on a mission to connect cities across the world with the help of their new Kickstarter campaign.

RE: For those folks who aren’t yet aware of your startup, can you give us a brief background about The Things Network?
Wienke: We are building a global free and open Internet of Things data network. We managed to cover the city of Amsterdam with this network in six weeks. Four weeks later, we had inspired cities around the world.

Based on our feedback from other cities, we realized that the cost for a single gateway was still too high for this to truly scale so we went and designed a gateway that cost only €200($220) per gateway.

RE: The Internet is buzzing about how The Things Network is poised to spur Smart City landscapes. Can you explain what a SMART CITY is for our readers? In your opinion, what makes a city SMART?
Wienke: Smart city is a fancy term for a city that is digitally connected and has a lot of components connected to the Internet and each other. Our lives get better if we get a better understanding of what the state of the city is. Is the air clean here? Is the light broken there? Is this trash can full? The quality of urban living can be increased significantly if we get a better understanding of what the state of a city is and when we can make better decisions based on that information. Our network can act as the glue to connect the information to the smart decision makers.
RE: Where did you get the original inspiration for your idea? Do you recall the initial idea spark™?
Wienke: The initial spark was when I saw LoRaWAN, the technology that is used by this network. It has 10KM reach, can connect up to 10,000 devices and the devices have very low power consumption so they can be placed anywhere just running on a battery. I first saw the technology at the IoT Meetup in Amsterdam and was immediately struck by it’s capabilities. In general, it looked like one of the first true solutions for all the promises people had put on what the Internet of Things should be able to deliver. 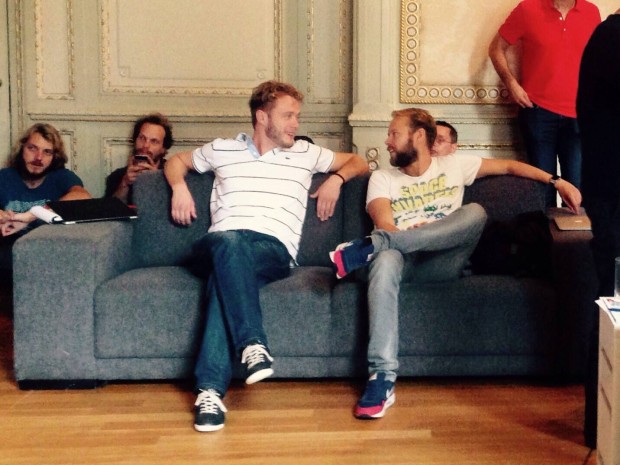 [THE THINGS NETWORK CO-FOUNDERS IN ACTION]

RE: It’s tough to get from initial spark to implementable idea. Did you utilize any specific “lean startup” techniques to develop/test/launch The Things Network? If yes, how? If not, why not?
Wienke: No, we just went for it. We were not “lean” at all. Initially we (me and Johan) were just two people who wanted to create a proof of concept, too small to consciously apply any process to it. You just do, learn and then you are there. Then working with the ten volunteers from our local meetup, when we covered Amsterdam with gateways, that went so fast, everyone fairly naturally found their role. You could call it “lean” in terms of the fast and fairly efficient way we turned it around, at the same time, I wouldn’t think of it as a consciously lean process. I believe real breakthroughs are rarely the result of applying process first. They tend to be chaotic, however you need to be the right type of person to be comfortable with the creative chaos and speed in such a project.
RE: So you instinctively, but not purposefully, used a little bit of “lean” in terms of operational efficiencies. Did you utilize any “design thinking” techniques? If yes, how? If not, why not?
Wienke: No, at the moment we’re working on the technology push. The only design we are applying is for the hardware devices we produced in beta before the Kickstarter. They are very first stage proof-of-concepts. They work well, but are not necessarily pretty. That’s not our focus at this stage.

We have the strong belief that if we provide abundant data connectivity good things will come from that. So a rigid and sustainable network comes first.

It is obviously very hard and distracting to work on a network with so many possibilities. The amount of awesome ideas and use cases coming our way are unbelievable and inspiring. The Internet of things has been suffering from a chicken and egg problem for a while, with the applications on one end and the infrastructure on the other. We decided to first build the chicken.

RE: The Things Network seems to be a rare example of the combination of having both a highly impactful product and amazing execution. Which do you think is more important for long run success: product or execution? Or both?
Wienke: Both. A car needs a motor and it needs fuel. For now execution is really key. We need to tell the world our story because we need people all around the globe to understand the potential of this vision. The product is at the center of this. It needs to be compelling. Ease of distribution is another element, this is where Kickstarter is such an amazing tool and it is playing its role very well for all of us at the moment. The third aspect is community of course. This is who we are doing this with and they are playing the most important role in this. Look at Google, Facebook, Uber — big ideas that need to scale are so dependent on how they can scale through people and how useful they become for them.
RE: You’ve chosen to utilize a community-run business model for The Things Network. Why so? Do you think a community-run business model will impact your ability to scale or make money in the long run?
Wienke: It is fairly easy to scale an open community-run model. There are no contracts and you can copy our code. The community members all personally benefit from what each are doing and help out each other as well. Isn’t that just awesome! It has way less managerial overhead. Think about it — everyone has a phone, but no one has to update their operating systems themselves. Our modern systems have become so automated, that managing communities is heavily automated and runs in the background, as much as it is personalized. We see it as a benefit for the hardware distribution and scale. In the long-run is another discussion and business models tend to circulate around the software, not the hardware. For example, Sony made huge losses on their Playstation 4 disk drives. The model was not to make money on the hardware. They still run a very successful gaming platform.
RE: It seems like LoRaWAN technology coupled with your community-run business model have the potential to disrupt the entire telco industry. How do you think telcos will cope with this new disruptive idea of building networks?
Wienke: For now it is not a threat to the high-bandwidth networks. But if we follow Moore’s Law we can predict that it will just be a matter of time, before it is true competition. In terms of speed of deployment and scalability we did probably scare them a bit with this social experiment we call The Things Network.
RE: You reached 75% of your Kickstarter campaign goal within the first 100 hours – and it looks like you are ticking towards 100% today. Congratulations! Why did you choose to launch a Kickstarter campaign now? Any big “A-has!” or surprises?
Wienke: Because everybody knows Kickstarter and not everybody knows The Things Network. Our initial target audience is highly represented there and it is their number one preferred platform. We are doing very well. At the moment of writing, we’ve reached 93% funding and we were featured on Kickstarter today. We have picked up more cities around the world and are adding new communities daily.

As it is our first Kickstarter, we are learning every day. The shipping costs were an issue but we had very understanding feedback from the backers and worked very hard in the first 24 hrs to find a better solution that would make everybody happy. We proposed giving everybody who orders a gateway a free UNO. It was great, to be able to have an actual conversation with the backers and we are happy we found a solution quickly. We are trying to be as communicative as we can despite being a small team managing the campaign, conference talks, our developers forum and supporting our global communities, whilst working on the backend software doing all of this as best we can. Big learning process, but the communication tools that didn’t exist 10 years ago are an amazing help managing a project as ambitious as this.

RE: So…what’s next for The Things Network?
Wienke: Covering the world to help see IoT truly take off the way it is supposed to. The next step is to make sure we are represented in every large city in the world.

We’ve had an amazing start so far. We haven’t even seen how big the Kickstarter campaign could be in 20 days. There are many things to do already, with the communities growing so fast. If everything goes well, in about 20 days we will be producing all the wonderful devices we raised money for — and that’s when the real work begins. If you want to take the lead in campaigning for your city, we can set you up with a page LIKE THIS. We are recruiting local initiators. SIGN UP HERE and we will get back to you shortly.

Many thanks to Wienke Giezeman (and his co-founder, Johan Stokking) for sharing insights during this week’s Expert Series. Look for our next Expert interview in two weeks time, right here on RE:INVENTION’s Everyday Inventive Blog.

No Comments to “Innovation Expert Series: The Things Network”